There is NO Fire & Brimstone!

You might be surprised but as a therapist, I work with mostly non-Jews. I live in Santa Cruz, California and most of California except for pockets in the Los Angeles area is predominately Christian. In fact, growing up, I was the only Jew in most of my classes. One time in elementary school I forgot to bring in a hard-boiled egg to dye for Easter and was punished by the teacher. So you might say, I have been quite acclimated to living in a Christian society.

As a Jew growing up in what's called a "Judaeo-Christian" society, you also get bombarded with the ideas prevalent within the Christian dogma, like punishment, hellfire and damnation, and along with that: fear of the Devil. Many of my clients report rejecting the Christianity of their youth because it made them feel so badly about themselves and in so much fear. But no matter what religious upbringing you have, seems there's no escape from the idea of a punishing G-d. That's why I love studying Hasidic Kabbalah. It makes me realize that "Judaeo-Christian" is a misnomer - there is no real Judaism in it.

In real Judaism, as taught in the Hasidic Kabbalah I've learned through Chabad, G-d is not the old, angry man in the sky. In fact, the only "hell" is what you feel after dying when your soul does a life review. There really is no need to "Imagine no hell below us and above us only sky." Ha!! John Lennon would have liked to know the truth instead of the co-opted dogma brought by the sons of Esau who are still trying to steal back the birthright. There is no Satan either. In fact, when you only have One G-d, there is nothing else, "Ain Od Milvado". "The satan" is merely an angel of G-d who tries to trip us up so we are able to have free choice. If you have many gods then you will get a Satan, right? (here's a good, short video on this: https://youtu.be/W1ZmGdLGZgM) 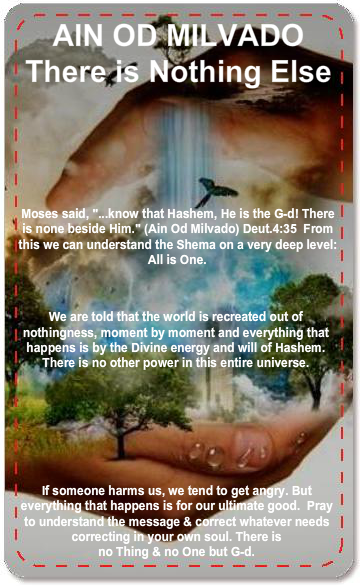 In real Judaism there is no emphasis on doing the right thing in order to get into heaven either. In fact, "right and wrong" comes from Adam and Chavah (in Hebrew her name is NOT Eve/evil) who ate the apple from the Tree of Knowledge of Good & Evil thereby giving us a world of natural consequences and free choice.

The emphasis in Judaism is instead not about getting to heaven but on making this world a heaven on earth.

This month on the Jewish calendar, contains the holiday where we commemorate the day that we received the Torah, including the 10 commandments and the 7 Noahide Laws. This information was given to us so that we share it with the world and so things would go well here on earth. By knowing the Divine Order of things, we can for the most part, work with, instead of against, the laws of cause and effect. Ultimately though, we will go beyond the laws of cause and effect when we have finally built a heaven on earth. Then our lives will be miraculous. 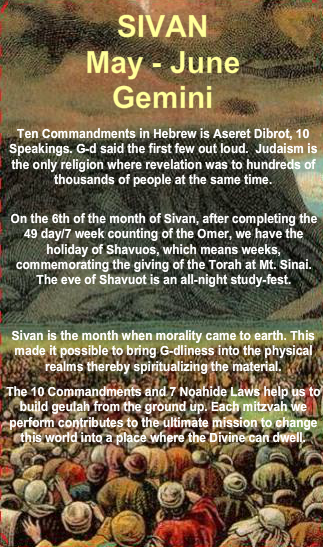 The Critical Inner Parent is the part of us developed in childhood that wants us to believe in crime and punishment. It creates the idea of a scary G-d/Parent who judges and punishes. It's an immature perspective on G-d that we use to try to keep safe. It is a false safety based on the hope that we can avoid bad things happening - which we really can't. In truth, things happen that cause and effect can't predict - which is why we have the question, "why do bad things happen to good people?" In Hasidic Kabbalah though, we learn that the "bad" things that happen are the way we co-create a heaven on earth and become unlimited.

Next month on the Jewish calendar, we confront the story involving our building a golden calf right after hearing the voice of G-d at Mt. Sinai. (How could we have done such a thing?) For this class I will explain the Jewish calendar through the lens of my year of cancer treatment. So this will give everyone in the class a way of understanding why I teach this class and how you too can see your own life mirrored in the energies present in the Jewish calendar.

Hope you can join the class in Soquel, CA. Please RSVP if you want to attend. Next class is a week from today: Sunday, 6/10 at 1pm.

P.S. If you are Christian but don't follow the religion and want to know what the Torah (Old Testament) has for you, there is something called "The Noahide Laws", which were given to all of the descendants of Noah, i.e: everyone. Go to AskNoah.org to answer any of your questions and 7LawsofNoah.com